The Secret of the Marriage Bed 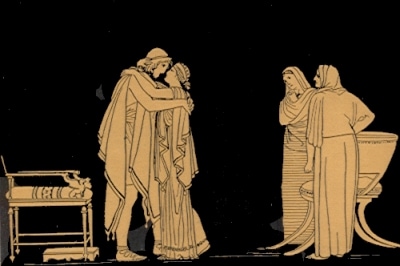 Penelope (to Telemachus): “If really he is Odysseus, truly home, beyond all doubt we two shall know each other better than you or anyone. There are secret signs we know, we two.” …
Odysseus: “There is our pact and pledge, our secret sign, built into that bed—my handiwork and no one else’s! An old trunk of olive grew like a pillar on the building plot… I shaped that stump from the roots up into a bedpost, drilled it, let it serve as model for the rest.”
Their secret! as she heard it told, her knees grew tremulous and weak, her heart failed her. With eyes brimming tears she ran to him…
Homer, Odyssey, Bk XXIII

One by one the servants, faithful and unfaithful, have learned the identity of the returned master. Aided by Eumaeus and Philoitios, and his son Telemachus, Odysseus has slain the suitors in his own home. There is yet one more who knows not of his return. For twenty years faithful Penelope has waited and watched, enduring press of suitors and false reports of a returning husband. She still guards her heart, even as she has guarded her honor. Telemachus says this beggar turned killer of suitors is his father, her husband, the lord of the house. But she devises her own test of the visitor, in whose presence she instructs her servant to remove the lord’s bed from the bedchamber. Odysseus himself had shaped the corner post from the trunk of a living olive tree, around which they built their home. Only he would know that the bed cannot be moved—unless a tree has been severed. Reacting with dismay to Penelope’s command, Odysseus passes the test. In her joy of recognition Penelope exclaims: “But here and now, what sign could be so clear as this of our own bed? No other man has ever laid eyes on it… You make my stiff heart know that I am yours.”

Some things a husband and wife share between themselves alone. The greatest of these is the very reality of their belonging to each other. This mutual gift has an utterly unique sign: one that literally embodies that gift. The mutual gift of spouses is, and should be, publicly known, and has public signs such as the wedding band.  But the reality of that gift has a deeper sign, the one that embodies the gift itself. And that is their secret alone. When a spouse goes forth from the home—whether it be for twenty years, or the length of a work day—he takes with him a secret, the secret of the marriage bed. The power of that secret is the reality of what has been said, enacted, given. To betray that secret is to betray one’s very self, the truth of who I am and have become.

Note: This is the last in a four part series of Wednesday Quotes about Eumaeus, the swineherd of the Odyssey.