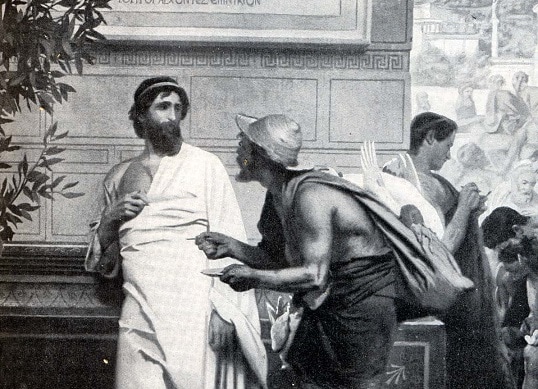 It can be discouraging watching people vie for political power. That they are motivated by a concern for our good is often hard to believe. A man like Aristides is a refreshing reminder: it can be otherwise. There are people that have the moral as well as the intellectual qualities to govern.

Plutarch relates a famous anecdote of when a public vote was being taken in Athens on whom to banish for ten years. Citizens would vote by writing a name on a ‘sherd.’

As therefore, they were writing the names on the sherds, it is reported that an illiterate clownish fellow, giving Aristides his sherd, supposing him a common citizen, begged him to write ‘Aristides’ upon it; and he being surprised and asking if Aristides had ever done him any injury, ‘None at all,’ said he, ‘neither know I the man; but I am tired of hearing him everywhere called the Just.’ Aristides, hearing this, is said to have made no reply, but returned the sherd with his own name inscribed. At his departure from the city, lifting up his hands to heaven, he made a prayer (the reverse it would seem, of that of Achilles), that the Athenians might never have any occasion which should constrain them to remember Aristides.

The willingness of Aristides to oblige this man by writing his own name for banishment is noteworthy. But his prayer for the city as he is being banished is truly remarkable.

We must recall that to be banished, or ‘ostracized,’ was for an Athenian to lose everything one holds dear. And of course as indicated by Plutarch, Aristides was far from worthy of such a punishment. Yet not only did he forgive. He prayed. May they not have occasion to regret this. May what service I have done still bear fruit. For, my life is about their lives.

A few years later when the Persians attacked, again, Athens would recall Aristides. And he came, he saw, and he served.

Plutarch (46-120 A.D.), a Boeotian Greek who became a Roman citizen, was especially known as a biographer of famous Greek and Roman men. This post is the final in a short series considering the life of Aristides (530-468 BC), one of the greatest of Athenian statesmen.

Image: Aristides writing his own name on the illiterate man’s sherd.

END_OF_DOCUMENT_TOKEN_TO_BE_REPLACED 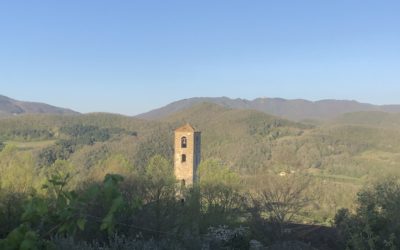 The bells of this campanile (bell tower) heralded Easter joy to a rural mountain community in Tuscany, as they have for hundreds of years. This Easter may we discover a joy that is more than a passing experience; a joy that endures not just as a backdrop but as the...