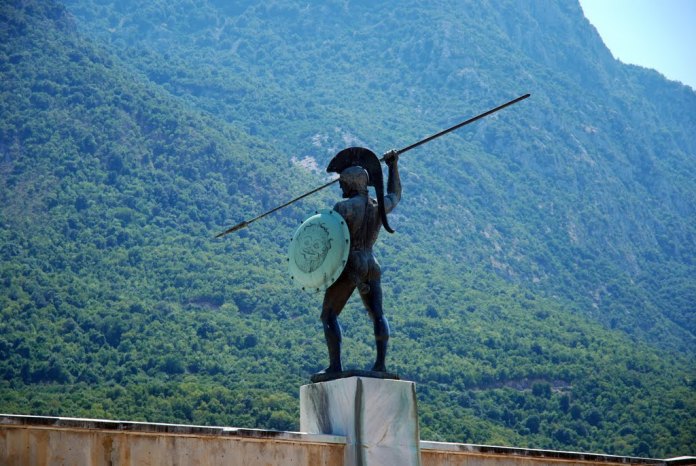 “Go, stranger, and to Lacedaemon tell
That here, obeying her behests, we fell.”
Spartan Monument at Thermopylae, as recorded by Herodotus in The Histories

Few stories in our history so capture the imagination.

Xerxes, on the other hand, could not see what was coming. Confident that the Spartans would retreat in the face of his countless army, he waited. And waited. His spies reported that the Spartans weren’t retreating; some were engaging in gymnastic exercises, others were grooming their hair. Confused, Xerxes sought someone who could explain these Spartans to him.

“Earnestly do I struggle at all times to speak truth to thee, sire,” began his adviser, “and now listen to it once more. These men have come to dispute the pass with us; and it is for this that they are now making ready. ‘Tis their custom, when they are about to hazard their lives, to adorn their heads with care.”

These Spartans were a different kind of men, as Xerxes and his men were about to find out. But they weren’t born that way. Spartan education was a concerted effort with a relentless focus: courage and honor. Aristotle, an Athenian, wrote these remarkable words of praise for a rival city: “But it is in the city of Sparta alone, or almost alone, that the legislator seems to have been careful about people’s upbringing and pursuits. In most cities such matters have been neglected, and each person lives as he wishes…”

One thing that can be said for Sparta: people did not simply live according to their own wishes. They lived according to a shared understanding of certain higher goods–an understanding in which they formed their youth. So they lived, and so they died.

There could have been no question in the minds of these citizen-soldiers: they would be remembered by the people of Lacedaemon (the region of which Sparta was capital). Both friends and strangers aplenty would tell, that obeying her behests they fell.

In that mountain pass remote from their homes, three hundred Spartans and their king died as they had lived, committed to the values and the common good of their homeland. And the world still stands in amazement.

Herodotus (484-425 BC) was an early Greek historian and came to be known as the ‘Father of History.’

Image is of the current monument at Thermopylae.