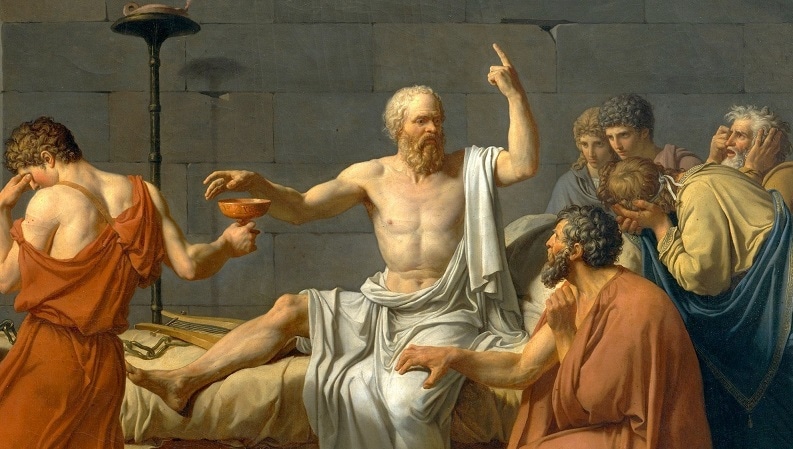 “If death is a change from here to another place, and what we are told is true and all who died are there, what greater blessing could there be…? If anyone arriving in Hades will have escaped from those who call themselves jurymen here, and will find those true jurymen who are said to sit in judgment there… would that be a poor kind of change? What would one of you give to keep company with Orpheus and Musaeus, Hesiod and Homer? I am willing to die many times if that is true… It would be an extraordinary happiness to talk with them, to keep company with them…
You too must be of good hope as regards death…and keep this one truth in mind, that a good man cannot be harmed either in life or in death, and that his affairs are not neglected by the gods.”
Socrates, The Apology

On All Hallows’ Day, and throughout the month of November, Christians traditionally turn their gaze to life after death, and to those who have gone before us.

Socrates did likewise. And I find his approach to the next life astounding.

His experience of life on earth led him to have very high hopes:
–that human life will go on, in a purified and heightened way;
–there will, at last, be complete justice, where each will receive what he truly deserves;
–we will be together with those who have gone before, having leisure to keep company with them;
–and this will be an extraordinary happiness.

If the next life were this, and nothing more, Socrates would gladly die many times in order to attain it. Indeed, not only would he die, but he would live in such a way so as to attain it. Clearly, in his mind there was a real continuity between how one lives now and how one lives after death.

But perhaps most striking of all is his conviction of the divine care for us humans. While he was not sure exactly what the continuation of human life would look like, of one thing Socrates was quite sure: the man who strives to live well can rest secure in a divine care, which will likely exceed even one’s reasonable expectations.

The thought of Socrates (c. 469 B.C.-399 B.C.) is known primarily through the writings of his great student Plato. Plato’s Apology gives an account of the trial in which Socrates was condemned to death by an Athenian jury.