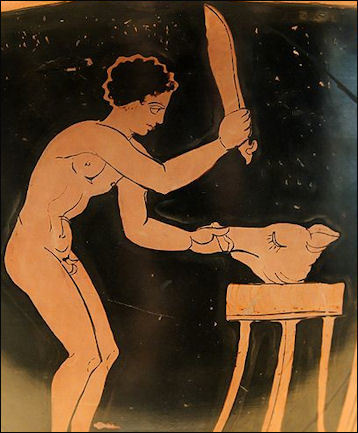 The swineherd then gave orders to his men:
‘Bring in our best pig for a stranger’s dinner. A feast will do our hearts good too; we know grief and pain, hard scrabbling with our swine, while the outsiders live on our labor.’
Bronze axe in hand, he turned to split up kindling, while they drove in a tall boar, prime and fat, planting him square before the fire. The gods, as ever, had their due in the swineherd’s thought, for he it was who tossed the forehead bristles as a first offering on the flames, calling upon the immortal gods to let Odysseus reach his home once more. Homer, Odyssey, Bk XIV

Disguised by Athena as a beggar, and thus a stranger even to his faithful swineherd Eumaeus, Odysseus has finally returned home to Ithaka. Though unrecognized, he is not unwelcomed. Having been received into the swineherd’s primitive woodland cabin, Odysseus expresses gratitude at the warmth of his reception.   Eumaeus responds, “Tush friend, rudeness to a stranger is not decency, poor though he may be, poorer than you. All wanderers and beggars come from Zeus.” But Eumaeus goes beyond avoiding rudeness. He slaughters the fattened pig—not for a son, but for a stranger. Because beggars come from Zeus. Then continuing to put first things first, he turns his thoughts to the gods, rendering them ritual honor before taking the life of the pig. And ever mindful of the master presumably still wandering far from home, he raises a prayer of petition, praying for his master’s needs even before his own.

Eumaeus is a man of incarnate piety. His work, and his hospitality, embody his regard for gods and men.

Note: This is the second in a series of Wednesday Quotes about Eumaeus, the swineherd of the Odyssey.